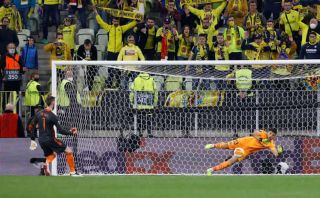 The less said about that night the better because it still hurts. And for Ole Gunnar Solskjaer, four months have passed since, but he will be reminded about it until the day he wins a trophy as Manchester United manager.

After all of the outfield players stood up to take their penalties, De Gea and Rulli went head-to-head to win the Europa League and become a hero.

Sadly, the Villarreal goalkeeper scored from the spot and De Gea missed. Rulli was the one who lifted the trophy that night but he admits that he didn’t talk to his fellow countryman during the shootout.

Speaking ahead of tonight’s Champions League reunion, Rulli said (via Manchester Evening News): “Throughout the shootout, we didn’t talk. He’s in his own world, I’m in mine. I was just focusing on memorising who was taking it and where their penalties would go.

“When it was David’s turn, I had no idea where he was going, but the way he approached the ball and the last step of his run-up made me think it was impossible he could hit it really hard.

“It happens in milliseconds, but I could see it clearly because of the way he slowed before the ball, his body shape.

“After the game he congratulated me, but I’d have preferred the shoot-out to have ended earlier, to have saved any penalty but his. I know how a goalkeeper suffers.”

De Gea lost his place in the Spain squad too, which came as an extra blow in the summer when he sat on the bench throughout Euro 2020.

Rulli continued: “Scoring stands out and it was amazing, but the photo is the save, flying for those two seconds, the whole tribe running towards me, all the suffering worth it.

“I never thought it would be my turn and had never taken one [a penalty]. We hadn’t practised penalties, because you can’t recreate all that. The manager had said; ‘Hit it with your heart, but a cool head’.

“I was thinking about penalties us goalkeepers hate. We have the odds stacked against us. The distance from the spot to the goal is short, the goal is big. If it’s well taken it’s very hard to save. It was a case of hitting it high where it’s difficult to reach and, above all, hard.

“But I tried not to think. Thinking would have been worse; ‘Just hit it hard’. I’d got a touch to the previous one from [Victor] Lindelof and I was wound up. I never thought about it being a final, Manchester United, David de Gea. I just thought; ‘Don’t screw it up. Hit it hard, with everything you’ve got left’. I hit it with all my soul.”