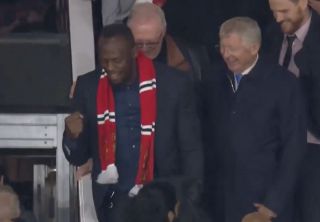 The Red Devils once again came back from 1-0 down to beat the Spanish side 2-1 during Wednesday night’s second round of European fixtures.

Bolt, like Ferguson, was live in attendance at Old Trafford and watched on as Ole Gunnar Solskjaer’s side produced yet another stunning comeback.

The pair, who witnessed Cristiano Ronaldo’s late winner, was pictured on BT Sport’s cameras reacting to their side’s excellent result.