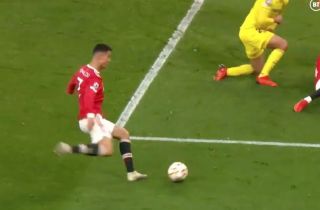 Viva Ronaldo! Bringing that winning mentality to United – something we lacked in Gdansk.

Incredible scenes at Old Trafford tonight as the best ever scored a stoppage-time winner to give Manchester United a 2-1 win over Villarreal in the Champions League.

The Reds were looking at a potential crisis when Villarreal took the lead but Ronaldo warned Old Trafford to remain calm.

It was that man who scored the winner in the end. Once again, in the right place at the right time.

Listen to that Old Trafford roar 😍

VAR checked the goal but saw no faults whatever as Jesse Lingard timed his pass to Ronaldo perfectly.

Five goals in five since he returned to Old Trafford.