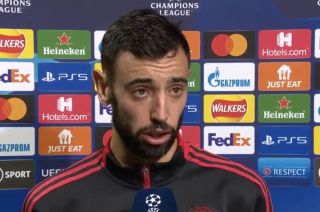 Manchester United midfielder Bruno Fernandes has reacted to the Red Devils’ latest comeback win against Villarreal in the Champions League.

Coming into Wednesday night’s important match, the Red Devils would have known anything less than all three points would have been disastrous following an opening group defeat against Young Boys.

However, despite falling behind early on, second-half goals from Alex Telles and Cristiano Ronaldo saw Ole Gunnar Solskjaer’s men claim all three points.

Speaking to BT Sport after the game, Fernandes reacted to his teammate’s performance and took the time to hail goalkeeper David De Gea, who saved the side on more than one occasion.

“I always thought we could win, even after they scored.”

Bruno Fernandes did his best with the fans still bouncing in the stands around him!