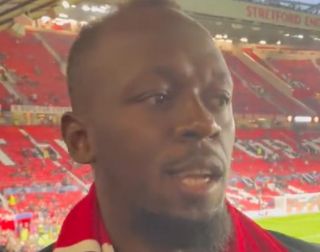 Olympic gold medalist Usain Bolt has long spoken about being a Manchester United fan. He is at Old Trafford for tonight’s Champions League tie against La Liga outfit Villarreal.

The Reds must improve on recent performances if they are to pick up their first three points in the Champions League this season, and they are up against the side that beat them in the Europa League final, albeit on penalties.

Villarreal have drawn five of their six matches in La Liga this season and a point would be a super result for them tonight, but Ole Gunnar Solskjaer’s side will probably need maximum points from their home matches in the group stage this season.

Bolt is predicting a comfortable win for the Reds — 3-0 — with Cristiano Ronaldo bagging a brace and Jadon Sancho scoring his first goal for the club.

🔮 @UsainBolt is backing @Cristiano and @Sanchooo10 to get on the scoresheet! 🤞#MUFC | #UCL pic.twitter.com/NDUCYTa6ul