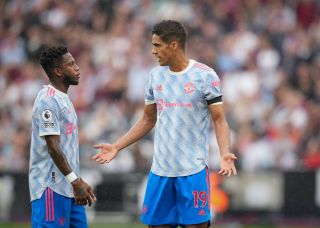 Question are being asked of Ole Gunnar Solskjaer after his side have lost three of their last four matches going into Wednesday night’s Champions League tie with Villarreal.

But new signing Raphael Varane is convinced United are on a “positive, upward curve” despite some poor results of late.

United are fourth in the Premier League on 13 points – one point adrift of leaders Liverpool after six matches. We’ve already been knocked out of the Carabao Cup and suffered defeat in our Champions League opener against Young Boys.

The 28-year-old arrived as a serial winner from Real Madrid during the summer along with Jadon Sancho and Cristiano Ronaldo, but results must improve if this team is going to enjoy any success this season.

So, despite a number of setbacks already this season, Varane is convinced United are on the right track.

“What I’ve been able to see is, with my teammates, there’s a lot of quality in our squad and our team,” Varane said, as per the Manchester Evening News. “We’ve got huge potential, I’m convinced of it.

“I think that there is talent, there’s experience there as well. We’ve got everything you need to have that belief that you can do well. I think that’s a really key issue: we’ve got to believe in ourselves, be convinced that we can do it, we have got to be ambitious, believe in our own potential, and then I think you can achieve things when you do that.

“There’s everything there in the right place. Just concentrate on the little details, keep believing and have that positive mentality. I believe that each time we go into a game, we go on that track and keep on that road of positivity, think on how we can improve in little details, and then I think we’ll be there. We’re on the right road.”

Varane spent a decade at Real Madrid and won everything. He will be expecting to remain at the top after his switch to Old Trafford, but that won’t happen if we keep losing matches we should be winning.