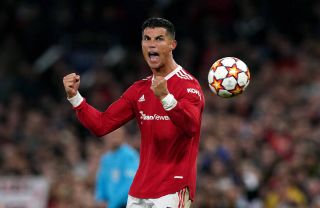 Cristiano Ronaldo’s winner at the death earned Manchester United a priceless victory in the Champions League over Unai Emery’s Villarreal.

Ole Gunnar Solskjaer’s Reds, trailing through Paco Alcacer’s second-half goal, hit back through a stunning Alex Telles volley before the competition’s record goalscorer stepped up in the dying seconds to get United off and running in the competition. Here is how each Red rated.

David de Gea – 10
A magnificent showing from the best player on the pitch. Almost single-handedly kept United in the game and then produced a vital save to deny the Spanish side a late winner at the end. Ronaldo may have scored the winner but the Reds were indebted to the revitalised Spaniard.

Diogo Dalot – 3
A difficult night for the United full-back. He did well having come on against Villa on Saturday but was given a torrid time by Arnaut Danjuma in the first half and was at fault for their goal.

Victor Lindelof – 5
Got caught out of position a few times but did nothing wrong and played some nice defence-splitting passes in the second half. Solid if unspectacular

Raphael Varane – 6
The only regular in United’s makeshift back four, it was a strangely mixed night for United’s Champions League Varane. Some good, some not so good but there were flashes of his class.

Alex Telles – 6
A poor first half but a thumping volley to equalise as he crashed home a spectacular strike for his first United goal. Made a crucial block in the moments before Ronnie’s winner. Went off with a knock.

Scott McTominay – 5
Like many of his team-mates, it was a mixed night for the Scot. Tasked with running the midfield almost on his own at times, McTominay struggled to contain Dani Parejo. Didn’t click with Pogba in the two.

Paul Pogba – 5
Almost scored an own goal and lost possession often, no surprise to see him taken off for Edinson Cavani as we chased the winner. I’d like to know what Graeme Souness thinks of his new France-inspired haircut.

Mason Greenwood – 6
Struggled at times, drifted in and out of the game but came alive to force a save from Geronimo Rulli and crossed superbly for Cavani to miss.

Bruno Fernandes – 7
Claimed a magnificent assist with a floated free-kick to tee up Telles for the equaliser, played with aggression, and came on strong in the closing stages.

Jadon Sancho – 5
A few bright tricks and flicks but another performance with flashes of style but little substance. His difficult start to life at United continues. Taken off for an extra man in midfield late on.

Cristiano Ronaldo – 7
Lacked service and seemed tired, but just when it seemed United were out of time, up popped this incredible player to write his own script to win it in Fergie time. The value of that goal alone earns CR7 a bonus point

Substitutes
Nemanja Matic – for Sancho (’75) – 6
Brought balance and helped to snuff out any lingering threat from the Spanish side.

Edinson Cavani – for Pogba (’75) – 6
Missed a sitter but put in a lung-busting shift and played a part in the winner.