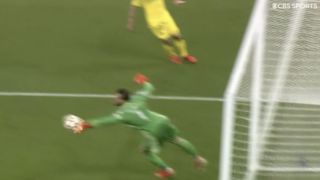 Manchester United are currently in action against Villarreal in the second round of Champions League group stage fixtures.

Looking to get their own back on the Spanish side following their Europa League final win last season, Ole Gunnar Solskjaer has named a strong, attacking starting lineup.

With three of four first-choice defensive players out through injury and suspension, Solskjaer has been forced to name a much-changed back four, featuring Diogo Dalot, Raphael Varane, Victor Lindelof and Alex Telles – all of whom are playing in front of goalkeeper David De Gea.

Despite having four times Champions League winner Varane among the side’s starters, the early stages of Wednesday’s game have seen De Gea remind fans why he should still be considered one of the club’s most trusted stars.

The opening 10-minutes have so far seen Villarreal exploit the Red Devils’ right-hand side with former Bournemouth winger Danjuma causing Dalot a world of problems.

After latching on to the ball, the Villarreal wide-attacker unleashed a beauty of a striker but was denied by United’s Spanish number-one.

Reacting to the number-one’s fine diving save, several fans were quick to take to social media to praise the experienced shot-stopper. Below are some of the best tweets.

Oh wow. What a save by De Gea. Big hand De Gea

What a save by De Gea! He’s on fire at the moment

Great save from De Gea. Dalot needs a hand down that side. #MUFC

That’s an incredible save from De Gea, I don’t think people realise how difficult that is to do