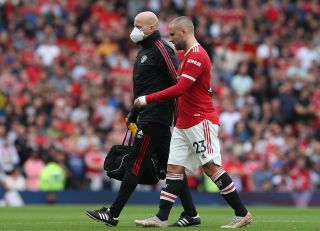 It doesn’t sound like Luke Shaw passed fit enough to be involved in tonight’s game against Villarreal in the Champions League.

Manchester United take on the La Liga outfit at Old Trafford with three of the usual back four ruled out with suspension and injuries. Shaw as well as Harry Maguire came off injured during the 1-0 defeat to Aston Villa at the weekend, while Aaron Wan-Bissaka will miss the first of his 2-match ban issued by UEFA.

The Manchester Evening News will always send photographers to the hotel where the team stay before games, and Raphael Varane was pictured with Diogo Dalot and Alex Telles — all three are likely to start in defence tonight.

Paul Pogba was spotted with a new hairstyle.

The MEN add that Shaw’s absence could be addressed later this evening if the left-back plans to join the squad separately, but that rarely happens and it looks like he will miss tonight’s match.