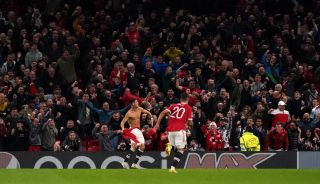 Manchester United were involved in yet another dramatic Champions League night at Old Trafford as Ole Gunnar Solskjaer and his side buried the demons from the Europa League final in May earlier this year.

Villarreal made the trip to Old Trafford and took the lead in the second half but a double from Manchester United ensured their first three points of their Champions League campaign.

Manchester United were far from convincing in the 90-minute affair and despite riding their luck at times in their defensive third, a late winner from Cristiano Ronaldo papered over the cracks this evening. Some supporters took their frustrations to Twitter, despite seeing their side steal all three points at the death.

Daylight robbery, we got absolutely battered. I’m massively behind Solskjaer, but my god, he must have been watching a different game!

However those scenes at the end, with your mates, it’s what it’s all about.

Sometimes its all about the 3 points,

Papering over cracks, but I’ll take that. Ronaldo getting us out of jail again. Cavani should be starting, that is all. Up the Reds.

Not sure the performance will do much to lift pressure on Ole or ease his doubters, but once again his changes played a big part in securing the end result. #MUFC

Got out of jail. Thank you Ronnie, Thank you David.

Another poor performance. Won that by the sheer grit and determination at the end and De Gea’s fantastic shot-stopping. Need to start correcting this and not waiting to be 1-0 down to begin playing.

The concerns over Manchester United’s general play are justified and although supporters will be delighted to see three points on the board, further questions will be asked of the side.

A double-header against Atalanta will now be seen as crucial as United look to book their place in the round-of-16 for the first time since 2019.

7 responses to ““Daylight robbery” – some Man Utd fans are unhappy despite late win vs. Villarreal”