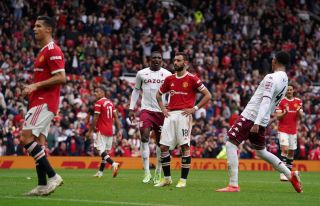 Manchester United have suffered their first league defeat of the season as Aston Villa win at Old Trafford after a dramatic last five minutes.

Ole Gunnar Solskjaer’s side started the game as the better side but as the encounter went on, United’s influence wained, and the visitors were handed a way into proceedings.

A late header from Kortney Hause gave Villa the lead but the centre-back gave away a penalty just moments after. Bruno Fernandes missed the resulting spot-kick and United leave with nothing.

David de Gea – 6
Could do nothing for the goal and pulled out a good save to deny Ollie Watkins in the second half.

Raphael Varane – 6
Didn’t have all that much to do but did well when called upon.

Harry Maguire – 5
A shaky afternoon for the skipper and his troubles were compounded when he was substituted through injury.

Luke Shaw – N/A
Came off early due to an injury.

Fred – 8
Manchester United’s best player by some distance. The result will hurt but the Brazil international can hold his head up high.

Scott McTominay – 5
An indifferent performance for the Scot – left a little to be desired in possession.

Paul Pogba – 6
Struggled to impact the game from the left-hand side but did well.

Bruno Fernandes – 6
The last-minute miss will steal the headlines but Fernandes was once again United’s best creator and the late mishap aside, he did well considering United’s flaws in the final third.

Mason Greenwood – 6
Always available on the counter-attack but he lacked the end product today. Perhaps a bit too selfish at times.

Cristiano Ronaldo – 5
Quite some comedown after the fairytale start to his second coming at the club. Contrary to last week’s win at West Ham, Ronaldo was very quiet against Aston Villa and never looked like causing them any harm.

Substitutions
Diogo Dalot – 6
On for the injured Luke Shaw and did well in an unusual position.

Victor Lindelof – N/A
On for the injured Harry Maguire late in the game.

Edinson Cavani – N/A
A late introduction for the Uruguayan and it was typically filled with drama. He lost his marker for Aston Villa’s goal before winning the late penalty.