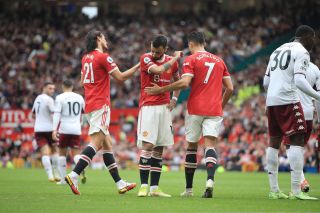 Manchester United’s promising start to their Premier League campaign has come to an end as they suffered their first league defeat of the season at the hands of Aston Villa.

Dean Smith’s side were without a victory against Manchester United since 2009 and came into the game as underdogs but stole all three points through a late goal from Kortney Hause.

United were offered a lifeline in the dying moments, however, as a handball from Hause was penalized by referee Mike Dean. Bruno Fernandes, who had just missed one penalty for United previously, blasted the spot-kick over the bar and was left holding his hands in defeat.

Think it’s safe to say that @Cristiano will now be on penalties as Bruno hits one that’s yet to re enter the Earth’s atmosphere.

Former Tottenham and England striker Gary Lineker has now suggested that Manchester United will make a change on penalty duties, as Cristiano Ronaldo is touted as the player to relieve Fernandes of his role, as seen above.

“Think it’s safe to say that (Cristiano Ronaldo) will now be on penalties as Bruno hits one that’s yet to re-enter the Earth’s atmosphere,” he said on Twitter.

It remains to be seen whether a change is made but Solskjaer’s loyalty could be put to the test.