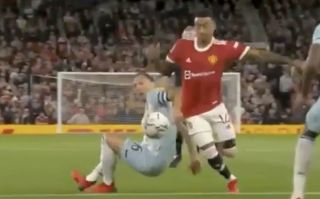 In light of a Manuel Lanzini strike, Manchester United fell behind in the first half of their third-round Carabao Cup tie against West Ham. However, at the midway point of the half, midfielder Jesse Lingard was seen being pulled down inside the Hammers’ area in what looked to be a clear penalty claim. Unfortunately for the Red Devils, referee Jon Moss was having none of it and waved the Englishman’s appeals away.

However, despite being on the back foot for large parts of the game, so far, the Hammers, who still lead 1-0 at the time of writing, are arguably lucky not to have already conceded a spot-kick.

Check out the moment Lingard was denied a penalty below.