Following the stunning summer re-signing of Cristiano Ronaldo as well as the scintillating form Mason Greenwood continues to display, Manchester United attacker Anthony Martial has been nudged even further down Ole Gunnar Solskjaer’s pecking order. In light of what appears to be a very tough period for the Frenchman, according to recent reports, the Red Devils’ hierarchy has informed the player’s representatives that they’re free to sound out a new club for their star client.

That’s according to a recent report from Eurosport, who claims Martial could be moved on as early as January – so long as the club’s £40m valuation is met.

Since his arrival at Old Trafford six years ago, the 25-year-old has gone on to feature in 263 matches, in all competitions, directly contributing to 128 goals, along the way, including a famous debut goal against rivals Liverpool. 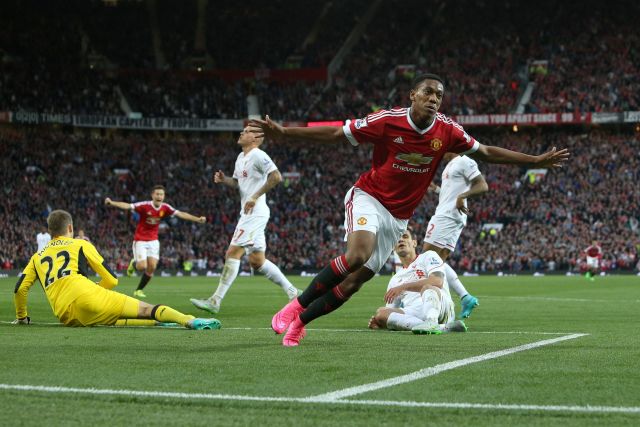 Anthony Martial (centre) made his Manchester United debut on September 12th 2015 and scored during his side’s 3-1 win over Liverpool.

However, despite still having three years left on his contract with United, the attacker’s plight has been well documented as he continues to struggle for not only game time, but also consistent form.

Eurosport notes that Atletico Madrid has a history of interest in Martial, but that was strongest prior to them re-signing Antoine Griezmann earlier this summer.

However, another potential destination for the France international could be Barcelona, however, given their decimated finances and the player earning £250,000-per week, negotiations could prove tough to conclude.

In light of the shock reports which could result in one of the club’s most popular players leaving in just a matter of months time, several fans have been quick to take to their social media to express their views. Below are some of the best responses.

We always seem to struggle offloading players, so I would hold my breath on that one.

Send him out on loan, just like Lingard. Good player but currently going through hell, just look at Depay.

Since long he should hv gone.. His departure was overdue.. Please go..

He can leave now

I pray & hope that Martial leaves for a club and a team that will value his qualities & for a proper tactician who will develop him to win the Ballon d’Or.

i dont wanna see him leave but there is no place for him in the starting xi he is too good of a player to warm the bench….