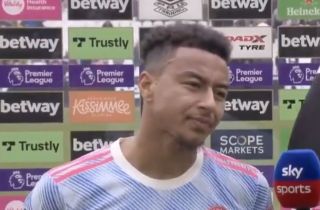 Manchester United midfielder Jesse Lingard, who spent the second half of last season out on loan with West Ham United, has reacted following his winning goal against his former side on Sunday.

The Red Devils travelled to the country’s capital to square off against David Moyes’ men in what was always likely to be a drama-filled match.

Looking to continue their impressive start to the new 2021-22 campaign, Ole Gunnar Solskjaer’s United would have been desperate to bounce back following a shock mid-week European defeat against Young Boys.

After falling behind in the first half, the Reds bounced back in devastating fashion with the game’s winning goal coming from none other than former on-loan Hammer, Lingard.

Speaking after the game and reacting to his bittersweet winning effort, the English midfielder admitted that while he enjoyed his loan spell with the Londoners, his long-term loyalty is very much with the Red Devils.

Jesse Lingard on scoring against West Ham on his return to the London Stadium pic.twitter.com/hkg8oy5JAc