Raphael Varane’s arrival at Manchester United was welcomed by supporters – the 28-year-old was earmarked as Ole Gunnar Solskjaer’s first-choice target in defence and although it’s still early days, he’s already making a difference.

Varane’s resume is unmatched in the Premier League and on top of adding a serial winner to the dressing room, United finally have another world-class defender alongside Harry Maguire and Luke Shaw.

In previous seasons, one of the main criticisms of United has been their slow build-up. Usually, that comes down to a team starting their attacking sequences further back in the pitch with an intention to pass their way forward. 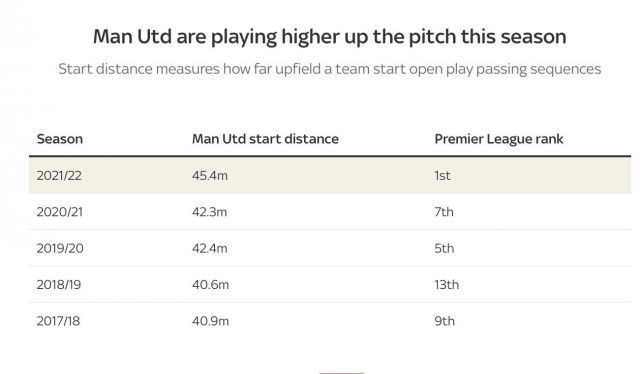 Read more: Key battles to watch out for: West Ham vs Manchester United

Since Varane signed, the distance from which United start their attacking sequences has increased, which signals an intent to play further up the pitch and closer to the opposition’s goal. In the past, the lack of pace between Maguire and Victor Lindelof could have been an issue.

United’s start distance of 45.4m is the highest in the Premier League, proving that Varane’s arrival has already made the difference Solskjaer desired.

Furthermore, United are yet to concede a goal from a set-piece this season – a big problem from last season. Eric Ramsay was added to Solskjaer’s coaching staff over the summer to help with dead balls but Varane has played his part.

According to the club’s official website, Manchester United are dominating aerial duels in the Premier League as they rank first in aerial duel win-percentage. United’s 61.5% success rate is 4% higher than second-placed Watford and is an improvement on last year’s mark of 51.6%.