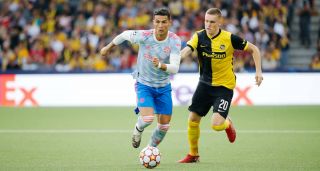 Manchester United’s Champions League campaign got off to a nightmare start as Jordan Siebatcheu scored a stoppage-time winner to earn Young Boys a famous 2-1 victory.

The media set everything for the Cristiano Ronaldo fairytale to continue, but it was bleak despite his opening goal – he was even one of the players to come off to everyone’s surprise.

His 135th Champions League goal came from a beautiful Bruno Fernandes assist as Ronaldo equaled Iker Casillas’ appearance record in the competition, but it wasn’t a match to remember for the Portuguese superstar.

Aaron Wan-Bissaka’s 35th minute red card turned the match on its head. His tackle was high and dangerous, so we can have no complaints with the referee’s call. It still doesn’t make up for his shoddy performance throughout the game.

You couldn’t argue with the result on the night – the Swiss champions took advantage of the sending off and we had no answer to their pressure. The goals were conceded through individual errors but the almighty struggle to keep hold of possession made it extra hard to watch.

The midfield was non-existent.

Moumi Ngamaleu gave the home support belief when he equalised and Luke Shaw should learn from his error, reacting far too slow when it came to applying pressure on the crosser. It got worse in stoppage-time as Jesse Lingard’s back pass allowed Siebatcheu net the winner.

Young Boys reacted like they’d won the Champions League but who would blame them?