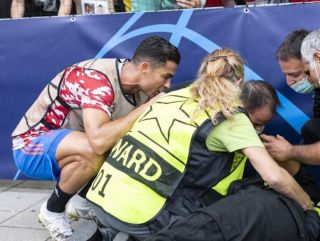 Cristiano Ronaldo was quick to help a matchday steward who had been knocked over after being hit with a wayward ball during tonight’s warm-up.

However, while warming up, The Mirror claims a steward was hit with a stray ball which knocked them to the ground. The first player to run over was Ronaldo to check on the individual’s well-being.

Check out the photo below:

Cristiano Ronaldo knocked out a steward with his shot in training before the match.

He jumped the barrier to check up on him while he received medical attention. pic.twitter.com/eOOo0bLMrw

Ronaldo’s scored the first goal of the evening but was substituted before the end.