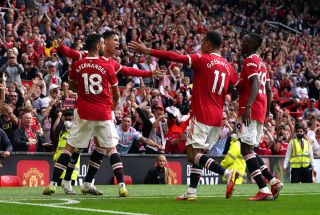 Let’s not get ahead of ourselves.

Manchester United have had a very good start to the Premier League season but there’s still a long way to go.

Ole Gunnar Solskjaer’s side have enough firepower to hurt any team in the land and the Norwegian knows that they will need to be at their consistent best to lift the title in May.

Right now, however, it’s about taking each game at a time and getting the job done. Like we did in our recent two outings against Wolves and Newcastle United.

Cristiano Ronaldo scored twice on his second debut for the club and it looks like the Portuguese superstar has given even at the club a huge lift. He remains one of the most lethal goalscorers on the planet and that gives United a boost.

Ladbrokes now have United at just 9/2 to finish the season as champions, moving them up with Liverpool, though they remind behind favourites Man City and Chelsea.