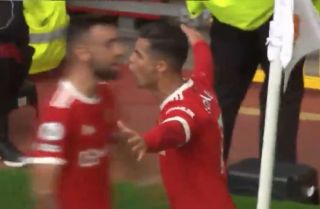 Cristiano Ronaldo has re-opened his goalscoring account with Manchester United.

The Reds lead Newcastle United 1-0 at half-time and it was Ronaldo who delivered just before the interval.

United have been on top since the beginning of the match, attacking in numbers and looking to find Ronaldo in the air, but it was a tap-in this time around for the Portuguese superstar.

Ole Gunnar Solskjaer will be happy with the team’s performance thus far because the attacking players have yet to get a run of games together. Newcastle were threatened and it was only a matter of time before United scored.

Right place at the right time. Ronaldo doing what he does best.

Let’s hope he finds the net again in the second half.