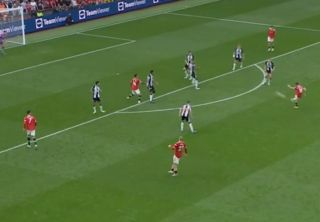 It was an absolute thunderbolt from Bruno Fernandes.

The occasion has already been marked by Cristiano Ronaldo, who has two games to his name, but Bruno Fernandes was not letting the game go by without reminding people that he is still the supplier of goals.

Bruno Fernandes had a number of opportunities from distance in the first-half, so it was telling that he fancied his chances this afternoon — as United look set to beat Newcastle with a strong Portuguese kick.

The goal was an absolute beauty and it should be the final nail in the coffin for the Mapgies.

United know they are bigger challenges ahead but this has been a convincing win.