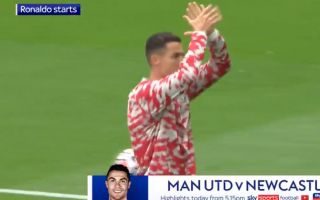 Cristiano Ronaldo is back!

Ole Gunnar Solskjaer announced his Manchester United starting line-up to face Newcastle in the Premier League and it includes Cristiano Ronaldo, who makes his second debut for the club.

Ronaldo has been out on the pitch warming up ahead of kick-off and he took some time to clap the fans after their warm welcome back to Old Trafford.

🔴 Cristiano Ronaldo warming up for Manchester United and clapping the fans. pic.twitter.com/v9qZznqiTy

We’re incredibly excited for the game to start to see Ronaldo in full flow for United again.

Yes, he’s a different player to what he was 12 years ago, but he has adapted his game to remain one of the best players in world football.

Right decision to put him in from the start!