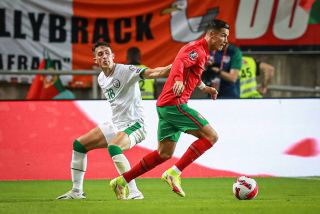 Wayne Rooney feels Cristiano Ronaldo has adapted his game and could play on until he is 40.

A lot has been said about Manchester United pulling out all the stops to sign a 36-year-old but acquiring Ronaldo does not need an explanation. This is one of the best players in the world, one of the greatest of all-time.

He now kicks off his second stint at United, after sealing a return to Old Trafford from Juventus on the final day of the summer transfer window. And throughout the international break, everyone was talking about whether Ronaldo would start this weekend against Newcastle.

The talk of the town.

Rooney is expecting big things from his former team-mate.

“The last time he played here, he was more of a runner, a great dribbler, with pace and power,” Rooney said, as per Sky Sports.

“Whereas now, he’s a goalscorer. I think his game has adapted dramatically.

“His ability is obviously one thing, but then he’s also looked after himself massively. He’s still in great condition. It wouldn’t surprise me if he’s playing until he’s 40, like Ryan Giggs did, and still scoring goals.”

This would suggest United have made an even better signing than some what some critics are suggesting. Ronaldo hasn’t returned to retire – he will want to continue winning trophies until he decides to hang up the boots.

Rooney believes the United players will have to adapt to having Ronaldo in the team, which is something that happened at Juventus.

“His team-mates will have to work a little harder,” he added. “But if it’s anything like last time – towards the last two years of playing with him – the team allowed him to do that because he scores you goals, and goals win you games.”