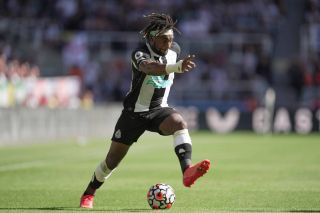 The buildup for this weekend’s clash between Manchester United and Newcastle United is, most likely, going to be the most predictable of the season. Even the most devoted analyst will struggle to see past Cristiano Ronaldo’s return to the club.

The 36-year-old superstar sealed his transfer from Juventus back to United last week and after being released early from international duty due to suspension, Ronaldo has been training with his new teammates this week.

The response to Ronaldo’s return in media has been as high-profile as you would imagine, even to the point where other Premier League players are talking about it. Everton winger Andros Townsend has revealed that it was ‘all we were speaking about’ at the Merseyside club.

Newcastle, who have picked up just one point from their first three league games of the season, make the trip to Old Trafford this weekend but star winger Allan Saint-Maximin is refusing to get drawn into getting sidetracked by Ronaldo, insisting that United already had a good squad.

“Even before Ronaldo signed they had a great team and they win games. So, for sure, with Cristiano Ronaldo now, they can look much better but we have to stay focused,” Saint-Maximin told NUFC TV, via the Chronicle.

“If we just think about Ronaldo we’re going to lose the game for sure. We have to stay focused and feel like it’s just football. If you give your best and give everything, anything can happen. We have to do it.”