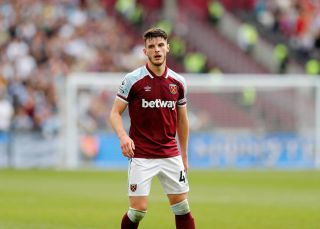 After a largely successful transfer window for Manchester United, plans are already being drawn up for next summer’s market, according to reports. The club strengthened two positions of desperate need this summer, with both a centre-back and a right-sided winger coming in.

To the disappointment of many supporters, a central midfielder did not, however, join Manchester United this summer. West Ham’s Declan Rice has been linked with a move to Old Trafford for several years and now, the club has earmarked him as their prime midfield target.

That’s according to the Manchester Evening News, who claim that figures at United have already discussed the potential framework for a deal to sign Rice next year.

Solskjaer is said to want another midfielder at the club and with Rice’s unwillingness to extend his current contract with the Hammers, there is potentially a deal there to be done. Furthermore, Pogba staying at United this summer is said to have been key to no midfielder joining.

Since making his debut for West Ham in 2017, Rice has developed into one of the most sought-after midfielders in the Premier League. The 22-year-old was a mainstay in Gareth Southgate’s England side as they reached the Euro 2020 final.