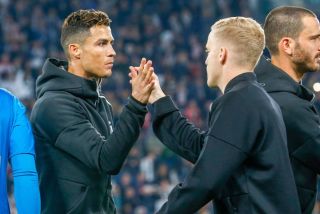 Last week, there were rumblings of a deadline day exit for Donny van de Beek but a move never materialised and the Dutchman ended up staying at Old Trafford. Van de Beek is yet to start a league game this season despite impressing during pre-season

Shortly after the deadline had passed, Guido Albers, Van de Beek’s agent, gave a sobering interview where he revealed the midfielder’s frustration over not playing in his first season. The former Ajax star started just four league games in 2020/21 but according to Albers, he is ready to showcase his talents this term.

Cristiano Ronaldo’s arrival at United could change things, however. Daniel James was the first casualty – the Welshman left the club on deadline day, despite starting two of United’s three games this season.

“Cristiano arrived on Friday which we knew was bad news for us,” Albers told Ziggo Sport, via the Manchester Evening News. “Pogba plays on the left, and with Cristiano’s arrival, it means another extra player in midfield, with Pogba moving away from the left.

“We had conversations with Solskjær and the board. We took the initiative to find a club and our search ended up at Everton. We opened talks with Marcel Brands and Farhad Moshiri.

“On Monday night [before deadline day] we received a call from Solskjær and the club who told us that a transfer was out of question and that he had to report himself to training the next morning.”

Ronaldo is not a direct competitor to Van de Beek’s place but it could have a knock-on effect on how Ole Gunnar Solskjaer sets his team up. Pogba is unlikely to keep his role on the left wing for long, with Marcus Rashford also closing in on a return.