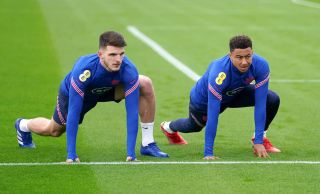 Manchester United are set to target West Ham midfielder Declan Rice next summer, according to reports. The young midfielder enjoyed a stellar summer with England and has been the subject of interest from several Premier League clubs.

Rice has three years remaining on his deal at West Ham and a transfer this summer always looked unlikely. Instead, Ole Gunnar Solskjaer’s squad was reinforced in other areas. Jadon Sancho and Raphael Varane were both earmarked at the end of last season as targets and the pair both joined.

According to ESPN, Manchester United remain keen on Rice, despite deciding against signing a midfielder this summer. A striker and a midfielder are on the list of targets for next summer, with Rice being one of a number of options for the club.

West Ham’s valuation is believed to have been at a hefty £80m, a figure which Manchester United will look to drastically decrease. Despite helping his club qualify for the Europa League, ESPN claims the midfielder wants to play in the Champions League.

Attacking midfielder aside, Manchester United have now signed a midfielder for the last three summers, with Fred being the latest reinforcement in that area in 2018.

One response to “Manchester United to target Declan Rice next summer”