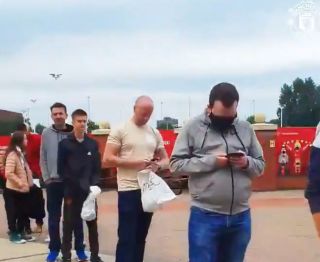 The CR7 brand is huge and Manchester United were right not to miss the opportunity to give him the number 7 shirt, and we highly doubt Edinson Cavani had any problems giving it over to the greatest footballer to play the game.

It’s a global brand and Ronaldo likes nothing more than building his image around the world. He goes about it the right way – by breaking world records for goals scored being a five-time Ballon D’or winner – and we were not one bit surprised to see queues line up outside the megastore in the wake of news that Ronaldo would wear #7 this season.

Fans arrived at the stadium this morning to pick up their new CR7 shirts, as seen in the video below:

Thinking of our colleagues at the Megastore this morning 😅

Fans like myself will buzz more from seeing Ronaldo score goals than, say, club suits who are only really interested in making coin for the Glazer family.

At £70-100 a pop, hopefully the club gains massively from these CR7 shirt sales, and it doesn’t just line the Glazers’ pockets.

Does anyone remember where the Ronaldo money went in 2009? That one is a real mystery.