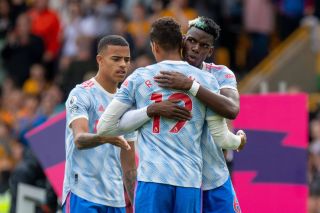 Manchester United have made a good start to the season, with two players earning praise for the way they’ve gone into the new campaign.

Ole Gunnar Solskjaer’s side have 7 points from a possible 9 after the first three matches of the season.

And with Cristiano Ronaldo added the team before the transfer deadline, our form in the league will hopefully become consistent, especially with the amount of firepower up front.

Two players, in particular, have stood out for the Red Devils. Mason Greenwood has three goals from as many games, while Paul Pogba has 5 assists to his name – already half of his best season tally (10).

🏴󠁧󠁢󠁥󠁮󠁧󠁿 Premier League Team of the Month for August

The importance of Greenwood’s goals has been massive, like against Wolves when he scored the games’ only goal, so hopefully he can build on that this season. It certainly looks like there’s no stopping him when the goal netting is in sight.

As for Pogba, the Frenchman will be in more teams of the month if he can be played further forward on the left — unlike what we seen against Wolves in the last match when he played much deeper in midfield.

Finally, let us know if you think WhoScored left anyone out in the comments section?