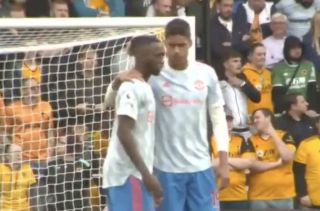 Having arrived at Old Trafford earlier this summer, Varane, 28, who has a wealth of experience and trophies to his name, was always likely to be an instant hit.

Making his long-awaited debut against Wolves in the Premier League last weekend, the French centre-back was arguably the best player on the pitch.

In light of what was an excellent showing from Varane, which helped contribute to the Red Devils’ 1-0 win, a fan clip has emerged which shows him guiding full-back Aaron Wan-Bissaka.

With his arm around the young defender, seemingly discussing how to improve his game, Varane’s leadership was clear for all to see and fans will undoubtedly resonate with that mentality.

Varane could arguably be the best thing to happen to Aaron Wan-Bissaka. Leadership, instructions, helping him with positional play. Varane will pass on his vast experience. This will help Bissaka’s game. #MUFC pic.twitter.com/EqyqT2938K