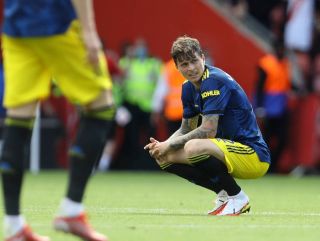 Manchester United centre-back Victor Lindelof has reacted to Raphael Varane’s transfer to Manchester United, insisting that competition for places is needed at the club.

The Sweden international has been a mainstay at the heart of Ole Gunnar Solskjaer’s defence for the last two seasons but could find it hard to break into the team again.

Varane became the club’s third signing of the summer last month and made his debut against Wolves last week, impressing in a 1-0 win over Bruno Lage’s side.

Varane has been a longstanding target for Manchester United but Lindelof has insisted that despite the two battling it out for a place next to Harry Maguire, the 27-year-old is happy to see the Frenchman join.

“It’s really good,” Lindelof said on Varane’s arrival, according to Swedish outlet Fotboll Direkt. “I play for one of the biggest clubs in the world and they have very good players.

“A competitive situation is what we should have and I only see it as a positive that we have added a good player to the squad,” he added.

Lindelof played the majority of last season with a back injury, having managed the problem throughout the campaign and the former Benfica star has now provided an update on his recovery.

“I’ve played a lot in the last two years and last year I had big issues with my back and played with pain,” he is quoted as saying. “My back feels good now, it’s probably not going to be a problem. But I don’t think I’ll play 50 or 60 games.”