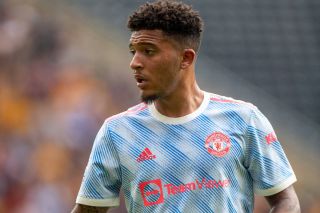 Manchester United winger Jadon Sancho has been ruled out of England’s World Cup qualifier against Hungary later on Thursday, it has been confirmed. The 21-year-old was flagged as a doubt earlier in the week but his exclusion has now been confirmed.

Sancho was one of four Manchester United players to be called up to Gareth Southgate’s squad for the first camp of the season, with Luke Shaw, Harry Maguire, and Jesse Lingard also making the cut.

But after making his first start of the season against Wolves last weekend, the former Borussia Dortmund star has been ruled out with a knock picked up in training, according to Sky Sports.

Despite not being risked against Hungary, it’s believed Sancho will remain with the England squad, which would suggest that the injury isn’t as bad as some fear.

Sancho has made three appearances for Manchester United so far and Ole Gunnar Solskjaer will be hoping to have him available for selection on September 11 when Newcastle make the trip to Old Trafford.