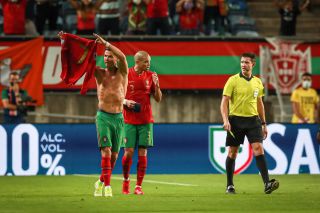 Manchester United have been handed a huge boost as Cristiano Ronaldo has been released early from the Portugal camp. Earlier in the week, the 36-year-old defied the odds again to break yet another record.

Ronaldo became the all-time top goalscorer in international football on Wednesday, having equalled Ali Daei’s record of 109 goals during this summer’s European Championship.

The former Juventus star missed an early penalty against Ireland but made amends with two late headers to earn the win for Portugal. He was also booked in the game, which means that he is suspended for their World Cup qualifier against Azerbaijan next week.

As a result, Ronaldo has been released early from the Portugal camp, an official statement from the Portuguese Football Federation has confirmed. Ronaldo was originally scheduled to return next Wednesday but the early release gives him the time to sort out his return to Manchester.

Ronaldo will still, however, need to have a work permit and visa in place before he can enter the United Kingdom. Furthermore, it is yet unclear whether Ronaldo will need to quarantine upon landing in Manchester.