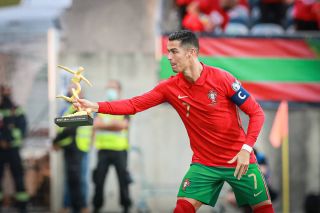 It’s been quite a week for Cristiano Ronaldo. Six days ago, Manchester United confirmed the return of their hero, subject to personal terms, visa, and medical.

Earlier this week, the transfer was made official and the 36-year-old finally, after 12 years, completed a sensational return to the club his career took off at.

On Wednesday, Ronaldo broke yet another record as he became the all-time top goalscorer in international football, surpassing Ali Daei’s record of 109 goals. The former Juventus star scored two late headers against Ireland to earn a 2-1 win in their World Cup 2022 qualifier.

Ronaldo celebrated the second goal by taking his shirt off, which resulted in a booking. Thus, he is now suspended for Portugal’s game against Azerbaijan next week. As a result, he has been released early from Fernando Santos’ camp, allowing him to join up with the United squad earlier than thought.

According to Portuguese outlet RTP, via Sport Witness, Ronaldo wants to start training with his new teammates as soon as possible but may have to wait. It’s claimed that he must undergo a five-day quarantine period upon entering the United Kingdom, as per COVID-19 regulations.

Regardless, Manchester United fans will be hoping to see Ronaldo make his second debut against Newcastle on September 11, with the player himself said to be ‘eager’ to feature.