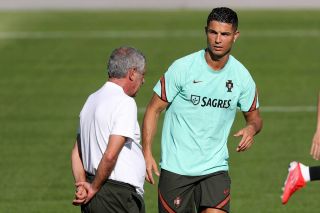 Every man and his dog is excited over Cristiano Ronaldo’s return to Manchester United. Well, except for Portugal manager Fernando Santos, who is busy preparing his side for their World Cup qualifier against the Republic of Ireland.

United formally confirmed Ronaldo’s arrival on transfer deadline day — on the even of the Group A clash — so Santos surely expected a flurry of questions to come his way.

The wider football community across the world has been captivated by Ronaldo’s return — even Pelé — but Santos couldn’t care less.

He is not concerned about what his superstar can do at Old Trafford but with what he can continue to offer the national team, which is pretty fair considering this is the coach of Portugal who is aiming for a successful World Cup once they’ve qualified.

“Ronaldo is part of the team, as always, captain, super-motivated, with an extra motivation to play for the national team,” said the 66-year-old during a pre-match press conference in Lisbon, as per Manchester Evening News. “I have no doubts that everyone is fit to face Ireland.”

One of the questions Ole Gunnar Solskjaer must ask himself is who takes free-kicks and penalties this season, with both Bruno Fernandes and Ronaldo in the same team?

Santos started Euro 2020 with both players in his team but Fernandes was dropped for their last group game against France.

“What matters to me is their motivation (Fernandes and Ronaldo) in the national team. Now, you who are British journalists, when you’re there, ask them about that (playing together for United),” Santos added.

“What interests me is the concentration they have on the national team and I can guarantee that they do.”

And no injuries, please! That’s all we ask.