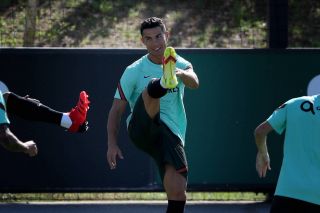 The dust has begun to settle but Cristiano Ronaldo’s homecoming is still difficult for many to stomach. The deal was unexpected and many supporters had already begun to accept the prospect of seeing the 36-year-old play for Pep Guardiola’s Manchester City.

Fortunately, that didn’t happen. Manchester United flexed their muscles and poached Ronaldo from beneath City’s noses, leaving their neighbours in a worrying state ahead of the final few days of the transfer market.

Former Manchester United midfielder Luke Chadwick has weighed in on the deal, hailing it as an “incredible piece of business”, which adds to the already impressive list of summer acquisitions this summer.

A 12-month long pursuit of Jadon Sancho was finally wrapped up in June whilst Raphael Varane followed the 21-year-old through the doors at Old Trafford. The pair have both been given warm receptions at Old Trafford but Ronaldo’s homecoming, possibly on September 11 against Newcastle, will be hard to match.

“It was absolutely incredible really. He’s a Manchester United legend, one of the best players of all time,” Chadwick told CaughtOffside.

“It looked like he was going to go to Man City and then things just changed at the last minute. It makes you wonder if it was set up to work out that way, the way it progressed.

“To see him back in a red shirt is just huge, he’s a legend at the club and it makes you think this could be the year that the Premier League trophy comes back to Old Trafford.

“It’s an incredible piece of business that will have the fans buzzing even more than they already were with two great signings in Varane and Sancho.

“Having Ronaldo back is massive news, he’s obviously not the same player he was a few years ago but he’ll add vast experience – he’s won something at every club he’s been at and now the challenge is for United to finish with some silverware.”

Ronaldo is currently away on international duty but he will be hoping to get through the brief break unscathed as he eyes a fairytale reunion in front of a full Old Trafford next week.