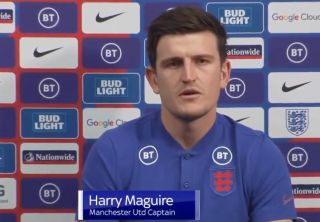 Manchester United captain Harry Maguire is away on international duty and has been speaking to the press about the club’s latest signing Cristiano Ronaldo.

Ronaldo made the late move back to United after his departure 12-years-ago, leaving Juventus aged 36 but age didn’t get in the way of him topping the goalscoring charts in Italy last season.

The Portuguese superstar was arguably the best player in the world before he initially left United, but there is no denying that he took his game to a new level at Real Madrid.

Maguire is buzzing to see Ronaldo return. He thinks he’s the best to have played the game.

“It’s amazing, for him to sign back to the club,” Maguire said. “For me the greatest player to play the game.”

🗣 "It's amazing, for him to sign back to the club. For me the greatest player to play the game."

The skipper will hope Ronaldo’s homecoming can lift to team and lead us to trophies this season. It’s also about time Maguire bagged himself a winners’ medal of some sort.