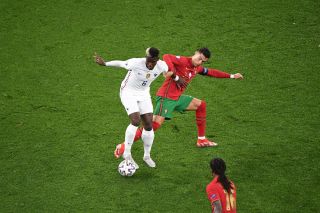 Manchester United are hopeful that signing Cristiano Ronaldo will aid them in their bid to secure Paul Pogba’s long-term future at the club, according to reports.

Ronaldo was officially unveiled as the club’s fourth and final acquisition of the summer on deadline day but one of their senior figures, Pogba, is out of contract next summer.

Pogba is yet to extend the six-year deal he agreed in 2016 and now, according to the Manchester Evening News, Manchester United hope that bringing Ronaldo back to the club will convince the Frenchman to sign a new contract.

It’s argued that Ronaldo’s arrival at the club is a compelling statement of intent, thus the optimism that Pogba could be swayed into a prolonged stay at Old Trafford.

Pogba has started the 2021/22 season in inspired form, assisting five goals in the opening three games. He came the first Manchester United player to assist four goals in one game in the Premier League curtain-raiser against Leeds United on August 14.

The week after, at Southampton, he became the first player in Premier League history to assist five goals in the first two matchdays of a season.