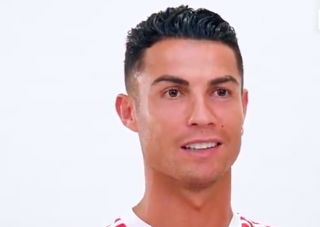 Cristiano Ronaldo sat down for his first interview after returning to Manchester United.

It was announced on transfer deadline day that Ronaldo has returned to Old Trafford after leaving for Real Madrid 12-years ago. The Portuguese winger has signed a two-year deal with an option for a third.

Following his switch from Juventus, where he spent three years, Ronaldo outlined how important Sir Alex Ferguson’s role was in his return to Old Trafford.

“I have a fantastic history with this amazing club,” Ronaldo told club media in an exclusive interview, as per ManUtd.com. “I was there at 18 years old and of course I’m so happy to be back home after 12 years. So I’m really glad and looking forward to start my first game.

“As everybody knows, when I signed for Manchester United at 18, Sir Alex Ferguson was the key. I remember when we played against Manchester when I was at Sporting Lisbon.

“For me, Sir Alex Ferguson is like a father in football for me. He helped me a lot, he taught me many things, and in my opinion of course he had a big role because the relationship that we had, we keep in touch all the time, and he’s an unbelievable person.

“I really like him a lot and he was the main key for me to be in the position that I am, that I signed for Manchester United.”

Already a legend at the club, Ronaldo also spoke of his affection for the United fans who have continued singing his name on the terraces, long after his 2009 departure and even when he returned as a member of the opposing team (Real Madrid & Juventus).

“I have fantastic history with this amazing club… I’m so happy to be back home”@Cristiano's first interview since rejoining Manchester United 🔴#MUFC pic.twitter.com/pl1HTYAvSA

“The Manchester United fans, they are special, I know, I remember very well,” Ronaldo added.

“I know they still sing my music which has made me feel even more happy and my commitment is to give everything on the pitch, like I did before, like I do it all the time, and try to do my best, help the team score goals, make assists, win games, and I hope to see them very, very soon.”

Ronaldo also spoke about his relationship with Solskjaer, who he played with at United, and made it clear that he’s there to help the team achieve what it sets out to.

“Well, we had a chat, but of course I’m going to have time to speak with him face to face, to know what he expects. As you know, I played with him for two or three years at Manchester United so I have a good relationship with him but now with a different role, I’m a player and he’s a coach. But it doesn’t matter, my relationship with him is great and as I say before, I’m there in Manchester to help the team achieve his results and the coach can count on me for whatever he wants. So I’m available for everything.”