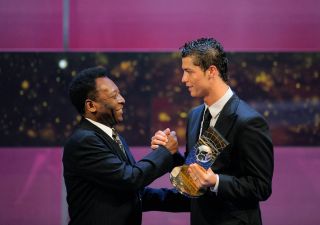 Brazil legend Pelé has offered Cristiano Ronaldo his best wishes following the completion of his return to Manchester United.

The best footballer of all-time has announced his homecoming, 12-years after leaving Manchester United to join Real Madrid.

However, after 3 years in Italy with Juventus, Ronaldo has decided to return to Old Trafford.

In offering his support for Ronaldo, Pelé made reference to how the Portuguese superstar is returning ‘home’. Something I think Reds worldwide will appreciate.

Pelé’s comment under Ronaldo’s latest Instagram upload, as seen in the @UtdDistrict tweet below, read: “There is no better feeling than conquering the world and returning home. Always be happy, Cristiano.”

🥺 Pelé to Ronaldo on Instagram: "There is no better feeling than conquering the world and returning home. Always be happy, Cristiano. 👏🏾" [IG: cristiano] pic.twitter.com/NYgg0ANS0K

With Ronaldo’s return comes high expectations for a 36-year-old, but age didn’t stop him topping the goalscoring charts ini Italy last season — or when he scored five goals at Euro 2020.

Pundits should choose their words carefully when dismissing what he can still produce on the pitch.

It’s been a few days of major excitement and Ronaldo is expected to make his second debut for the club against Newcastle United on September 11.