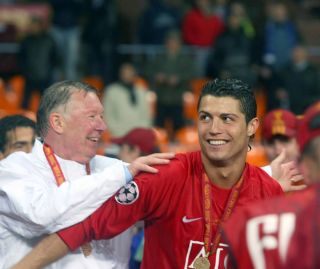 Cristiano Ronaldo is back at Manchester United. A dream made reality.

The Portugal international has left Juventus after three years to return to Manchester United, where he became a world beater and left for Real Madrid 12-years ago.

Sir Alex Ferguson was responsible for bringing Ronaldo to United as a kid from Sporting Lisbon, and he went on to become the most important player in one of the Scot’s most important teams.

And to this day they share a special bond.

The former United manager reached out to Ronaldo prior to his return, but at a time when the media thought the Portuguese superstar was joining Man City instead.

United fans will love Ronaldo’s message on Instagram, with a special shout-out to Ferguson.

“Everyone who knows me, knows about my never ending love for Manchester United,” Ronaldo wrote. “The years I spent in this club where absolutely amazing and the path we’ve made together is written in gold letters in the history of this great and amazing institution.

“I can’t even start to explain my feelings right now, as I see my return to Old Trafford announced worldwide. It’s like a dream come true, after all the times that I went back to play against Man. United, and even as an opponent, to have always felt such love and respect from the supporters in the stands. This is absolutely 100% the stuff that dreams are made of!

“My first domestic League, my first Cup, my first call to the Portuguese National team, my first Champions League, my first Golden Boot and my first Ballon d’Or, they were all born from this special connection between me and the Red Devils. History has been written in the past and history will be written once again! You have my word!

“I’m right here!
I’m back where I belong!
Let’s make it happen once again!

Ultimately, there should be no shortage of goals at United this season. Ronaldo will be joined by Bruno Fernandes, Jadon Sancho, Mason Greenwood, Marcus Rashford, Edinson Cavani and Anthony Martial.

This is a fantastic signing and it comes as no surprise that so many legends of the club made an effort for it to happen, including Bruno Fernandes.