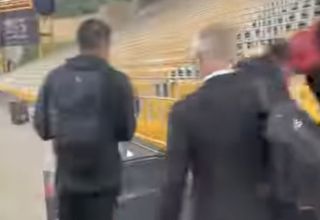 Following his stunning move from Real Madrid earlier this summer, Manchester United defender Raphael Varane finally got to make his long-awaited club debut during his side’s 1-0 win over Wolves on Sunday.

In what was an excellent debuting performance, which even saw the Frenchman claim an assist for Mason Greenwood’s only goal of the game, Varane was spotted after the match speaking to manager Ole Gunnar Solskjaer.

When quizzed by his new gaffer on how the Premier League stacks up against Spain’s La Liga, Varane admitted England’s top-flight operates at a lot quicker pace.