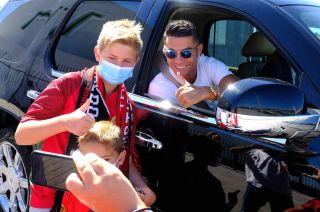 Since the news broke last week, Cristiano Ronaldo has dominated the headlines in the sporting press worldwide. The famous attacker is set to to complete a sensational return to Manchester United, with official confirmation of the transfer expected in the next 36 hours.

After the game against Wolverhampton, Ole Gunnar Solskjaer opened up an avenue for Daniel James to depart the club, amid suggestions his playing time would be significantly reduced.

Now, James is looking increasingly likely to leave the club, with an agreement reached between Leeds United and Manchester United for his transfer.

James’ imminent departure could spark a merry-go-round of shirt numbers at Manchester United, with the main goal seemingly being to reunite Ronaldo with his famous number seven.

According to French journalist Tanguy Le Seviller, as seen above, James’ departure means that Edinson Cavani will give up his No7 to take the Welshman’s No21. This will then naturally lead to Ronaldo inheriting the vacant No7.

Ronaldo was urged by Sir Alex Ferguson to take on the No7 shirt immediately after signing for the club in 2003 and since then, the sight of the 36-year-old not wearing it has become inconceivable.