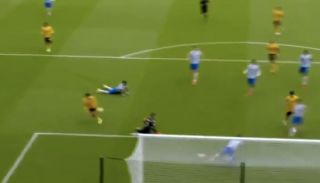 Manchester United full-back Aaron Wan-Bissaka has somehow ensured that his side’s Premier League match against Wolves did not see an early opener.

Despite being on the attack, the Red Devils were forced back following a misplaced pass from midfielder Fred.

With wide-attacker Adama Traore running at their backline, United would have been fearing for the worst and had it not have been for a last-ditch goal-line block from Wan-Bissaka, would have found themselves one nill down.

Ole Gunnar Solskjaer will now need to snap his side into action following what has been a very nervy looking opening quarter of an hour.