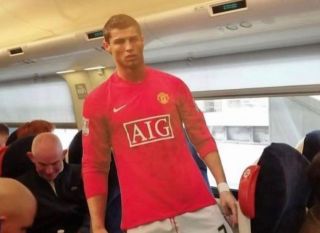 Manchester United fans are doing their best to ensure Cristiano Ronaldo is at Molineux today.

Although the soon to be revealed Manchester United signing is in Lisbon, a group of fans decided to bring a Cristiano Ronaldo cardboard cut out with them to the match today.

So long as they don’t misplace it on their travels, and it gets past security at Wolves, we might see it make an appearance at the match.

Ronaldo is not expected to make his second debut for Manchester United until September 11, against Newcastle United in the Premier League, and there’s bound to be a rush for tickets.