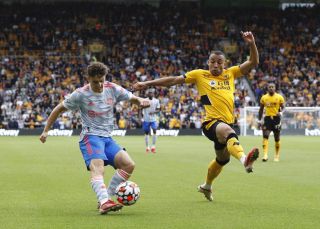 The arrival of Cristiano Ronaldo will shake things up inside the Manchester United dressing room hierarchy, it’s fair to assume. Ronaldo is expected to be available for United’s next league game and he is unlikely to accept a role on the bench.

Daniel James, who has often been a frustrating figure at Old Trafford since he joined the club in 2019, has started two of United’s three games this season but could be in danger of being ousted.

Jadon Sancho, Marcus Rashford, and Paul Pogb are all preferred to the Welshman on the left-wing whilst Mason Greenwood is the clear first choice on the other side.

Following his side’s 1-0 win against Wolves earlier on Sunday, Ole Gunnar Solskjaer refused to rule out the possibility of James leaving the club before Tuesday’s deadline.

Solskjaer on Ronaldo: "He's not signed to sit on the bench. He will make us a better team."

On James: "There has been a couple of enquiries for some of our players. With the signing of Cristiano we might give less playing time to a few. Dan is a Man United player at the moment."

“There has been a couple of enquiries for some of our players,” Solskjaer said, according to The Athletic journalist Laurie Whitwell, when quizzed on James.

“With the signing of Cristiano, we might give less playing time to a few. Dan (James) is a Man United player at the moment.”

These comments come just days after CaughtOffside reported Leicester City are maintaining a strong interest in the Welshman after trying and failing to sign him at least once already this window.

Leicester City have already tried once this window to get Dan James from #MUFC #LCFC are now waiting to see what happens with CR7 – considering second attempt before window closes 🔵 pic.twitter.com/kHDzwq5HkG

The Norwegian manager is seemingly remaining coy on whether his side will be doing any business in the next 48 hours but the comments won’t be pleasant reading for James.