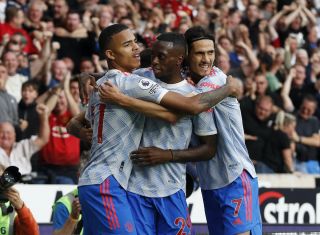 Ole Gunnar Solskjaer’s United pulled off the ultimate smash and grab raid as despite being distinctly second best at Molineux, a late Mason Greenwood goal saw the Reds create a new all-time Premier League record of 28 away games unbeaten with a classic 1-0 away win. Wolves will feel hard done by.

Made three top stops to keep a charging Wolves team at bay. Denied Francisco Trincao early on and then pulled off a remarkable double save to deny Roman Saiss in the 66th minute as the hosts looked certain to go ahead. How important they proved to be.

A mixed day but one excellent block on the line early on in a fast start from Wolves. Kept tabs on Nelson Semedo and stemmed the tide in the second half. Did OK.

Kept the talented Raul Jimenez under wraps and rarely looked troubled. Did his job well and looked assured alongside Varane. A busy man but had the Wolves attack in lockdown by the end.

An excellent debut from the former Real Madrid man. Kept his head and organised well as United came under siege early on, won some huge headers and claimed an assist. Impressive. The best player on the pitch by a distance.

A difficult day for the left-back up against one of the best wingers in the business in Adama Traore. This was an excellent performance from the powerful Spaniard and Shaw struggled.

I didn’t think Fred could be any worse than last week at Southampton. I was wrong. At times it felt like he had a Wolves shirt on. Are we sure this man is Brazilian?

Awful in the first half but much improved after the break as he pulled the strings and broke the lines well with his passing. Played a part in the goal in the stereotypical game of two halves.

Showed flashes but was marshalled well by the Wolves defence. Withdrawn for Anthony Martial as the Reds chased the winner.  More to come from him and had his moments

A day on the periphery for Fernandes. Again, like many of his team-mates, had his moments but kept quiet and struggled to get involved.

A poor performance from the Welshman. Worked hard but offered little. Could a loan move beckon?

Had United’s two best chances before popping up with the winner for his third goal in as many games.  The ultimate smash and grab raid spearheaded by this generational talent. We’re so lucky to have him.

Did little when he came on as United’s threat increased

No rating for the forgotten man