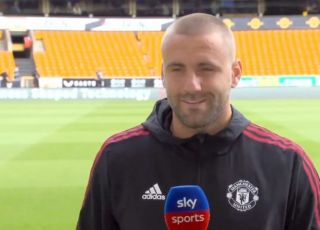 Luke Shaw says the entire Manchester United squad have been given a lift after the club agreed a deal to bring Cristiano Ronaldo home.

The Portuguese superstar looked like he was Man City bound earlier this week before United hijacked the transfer and lured him back to Old Trafford.

We are still waiting on an official announcement from the club, but all is in place for the great homecoming, after the deal was agreed on Friday.

Shaw is excited to share a dressing room with Ronaldo, telling Sky Sports (footage below updated by Football Daily): “Yeah of course there is a lot (of buzz).

“I feel like it’s given the club a massive lift, not just inside but also outside which is obviously a very big positive.

“He’s been one of the best players in the world for a number of years now and everyone’s very excited for him to come in and especially to learn off him and to be able to play with him too.”

🗣"I feel like it's given the club a massive lift."

Luke Shaw is very excited to have Cristiano Ronaldo back at Manchester United pic.twitter.com/bUazk8z52q

Ronaldo will obviously be a very different player to the one that left 12 years ago.

We expect he will spend more time inside the box than running up and down the wing.