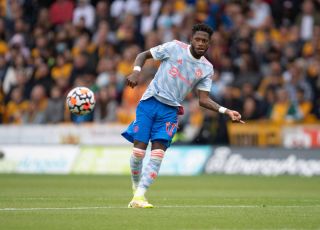 The international break is upon us and if Manchester United have made a habit of dropping points before these breaks in the past, one positive change has already been made in this campaign.

After a disappointing draw at Southampton last week, Ole Gunnar Solskjaer named a strong team for the game against Wolves. Raphael Varane made his maiden appearance for the club, and Jadon Sancho started for the first time. Edinson Cavani, who has missed the first two games of the season, also featured for the first time in this campaign.

It was the first clean sheet of the season for United but the encounter was far from comfortable. Wolves had their moments and nearly scored on a few occasions, most notably when David de Gea pulled off an incredible double-save to deny them.

Although three points remain the most important thing at this point of the season, Solskjaer will be mindful of some of the weaknesses in his side.

Time’s up for Fred: a chance for Donny van de Beek?
The midfield was been a position of worry this summer and although the club has impressed in the transfer window, other positions have been prioritised. Sancho and Varane filled equally urgent needs but Solskjaer’s persistence with Fred is starting to perplex supporters.

The Brazil international has struggled in all three games so far, despite getting on the scoresheet in that opening day victory against Leeds. Donny van de Beek is far more effective further up the pitch but he is versatile – is that enough for the Dutchman to replace Fred? Scott McTominay faces a short spell on the sidelines with a groin injury but his absence is being proven to be a huge blow already.

Raphael Varane proved his class
The 28-year-old oozed class on his debut. Victor Lindelöf has done little to warrant being dropped this season but he can have no arguments after watching Varane seamlessly slotting in next to Harry Maguire.

The four-time Champions League winner was a calm presence and barely put a foot wrong throughout the 90 minutes. Most notably, he won nearly all of his aerial duels – most of them coming from set-pieces. If Varane was the lowest profile signing out of himself, Sancho, and Cristiano Ronaldo, he is already proving to be perhaps the best.

Jadon Sancho needs time after joining a new league
The encounter at Molineux also saw Sancho start for the first time and although the 21-year-old did fine, certainly in instances, it’s clear he needs time before he can rediscover the dazzling form shown for Dortmund.

United’s slow tempo didn’t help but on a few occasions, especially in the first half, Sancho was out of sync with the rest of the team. It was through no fault of his own, however. There is fantastic talent in those boots and eventually, it will come.