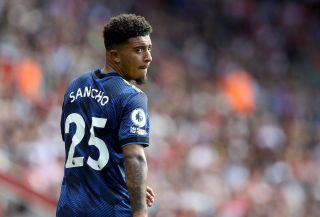 Ole Gunnar Solskjaer has named his Manchester United starting eleven to face Wolves at Molineux. A full debut for both Jadon Sancho and Raphael Varane is ahead of us.

Wolves have yet to get the results they need under Bruno Lage, but they are a lot more attack-minded as a unit, and I can see their intensity stressing United’s midfield and defence.

Ole Gunnar Solskjaer’s side had every reason to be optimistic after starting the Premier League season with a thumping 5-1 win over Leeds United on the opening weekend of the campaign.

However, they then slipped up at St. Mary’s as they were held to a 1-1 draw by Southampton last weekend.

The Reds will be keen to avoid losing any more ground in the title race at this early stage.

Fred sits in midfield alongside Paul Pogba and Bruno Fernandes.

All while Daniel James, Mason Greenwood and Jadon Sancho get creative up top.